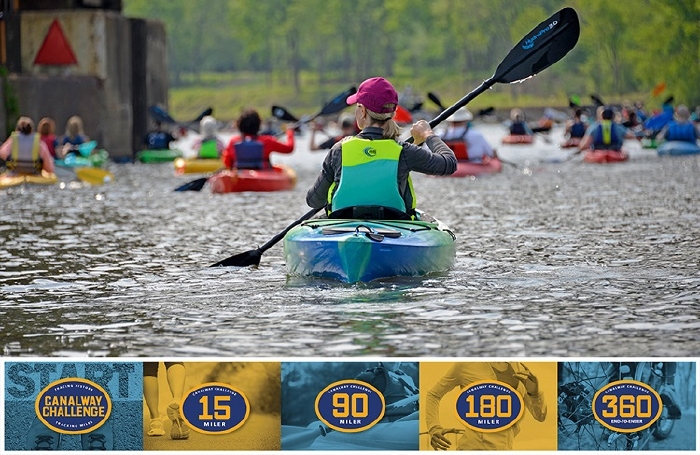 People from 26 states and Canada walked, ran, cycled, and paddled their way to fitness and fun this year as part of the new Canalway Challenge, launched by the Erie Canalway National Heritage Corridor in May. More than 1,279 individuals, 267 teams, and 30 organizations signed on. Participants completed 285,000 miles on the Canalway Trail and NYS Canal System, the equivalent of circling the globe 11 times.

An Experience of Discovery

In addition to meeting a fitness goal of 15, 90, 180, or 360 miles, Canalway Challenge participants expressed excitement about exploring new places, spending time with friends and family, and seeing wildlife while on the waterway and Canalway Trail. The Challenge appealed to people seeking more adventurous weekend getaways and vacations, as well as to local residents seeking to get or stay fit.

â€œThe Erie Canal is an experience of discovery! How awesome is that," said Meg Kolodzie, who earned status as a 180 Miler. Kolodzie and her husband sold their home and hit the road in 2015 to see the U.S. Their travels this summer took them to New York State, where they explored the Erie Canal as part of the Canalway Challenge. â€œWe passed through NY's heartland, gliding, biking, and hiking near historic quaint canal towns, scenic farmlands, and thriving wildlife preserves. The canal joins attractions both modern and historic, so there's something new around every bend, every turn."

â€œThe Erie Canal is a valuable tourism asset for New York State, and the Canalway Challenge provided so many people with new ways to experience the canal and its surrounding communities, making it more likely they will plan return visits and expanded canal-based getaways," said New York State Executive Director of Tourism Ross D. Levi.

Steven Sheppard came from Williamstown, Massachusetts to cycle 180 miles. â€œThe Canalway was wonderful. I've done tours of this length in France (along the Canal du Midi) and in Florida (up the Atlantic Coast from Key West to Georgia) and the Erie Canalway was comparable to these experiences. I can't wait to come back and do the western portion!"

â€œThe Canalway Challenge was a great way to spur more people to not only achieve fitness goals, but to also experience the beauty and history of the Canalway Corridor. I'm confident next year's Challenge will invite more people to the water and trail for the first time and encourage those who took part this year to explore new places in 2020," said Brian U. Stratton, Director of the NYS Canal Corporation.Collaboration Key to Success

Promotional support from many TPAs, organizations, state agencies, visitor centers, and recreational groups was key to launching the Challenge far and wide. From brochures in visitor centers to outreach at the NYS Fair to videos shared on social media, multiple stakeholders helped to sustain interest throughout the summer.

The Canalway Challenge returns in 2020. Erie Canalway National Heritage Corridor invites TPAs, tour operators, and others to become Promotional Partners. A full suite of promotional materials are available. To find out more, contact Jean Mackay, Director of Communications and Outreach at jean_mackay@partner.nps.gov and visit www.canalwaychallenge.org.

The Canalway Challenge is funded in part by a grant from Market New York through I LOVE NY, New York State's Division of Tourism, as part of the state's Regional Economic Development Council initiative. Additional sponsorship is provided by the New York State Canal Corporation.

ABOUT THE ERIE CANALWAY NATIONAL HERITAGE CORRIDOR
Nearly 200 years after its construction, the Erie Canal remains an iconic symbol of American ingenuity and determination. The Erie Canalway National Heritage Corridor preserves our extraordinary canal heritage, promotes the Corridor as a world-class tourism destination, and fosters vibrant communities connected by more than 500 miles of waterway. It achieves its mission in partnership with the National Park Service, New York State agencies, non-profit organizations, local residents, and more than 200 communities across the full expanse of upstate New York.
www.eriecanalway.org
www.canalwaychallenge.org