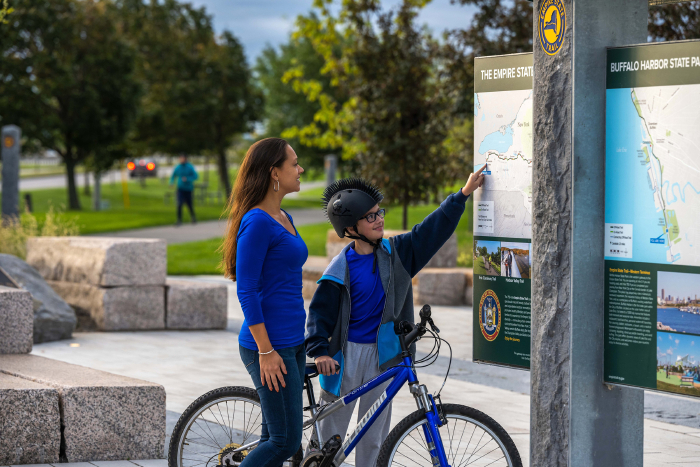 Highlights Lodging and Amenities Along the Empire State Trail

Video and images of the Empire State Trail are available here

In celebration of National Trails Day, a new "Trip Planning" feature is now available on empiretrail.ny.gov, the official website for the Empire State Trail. The site provides information about trail routes, parking, nearby attractions, and a variety of overnight accommodations available along or near the Empire State Trail route, including hotels, inns, bed & breakfasts, resorts and campgrounds. National Trails Day, the first Saturday of each June, celebrates America's trail systems and their supporters and volunteers.

"The Empire State Trail is a wonderful pathway through our state's scenic beauty and extraordinary history. Whether you want to plan a day-trip or an epic long-distance adventure, there are a wealth of places to see and enjoy along the way," State Parks Commissioner Erik Kulleseid said. "The updated website is a great tool for visitors to plan the ideal trip, and will help bolster New York's regional tourism strategies."

In addition to providing a wide range of lodging options within five miles of the trail, the new trip planning features include downloadable GPS routes and other resources such as access to maps and guidebooks.

New York State Canal Corporation Director Brian U. Stratton said, "Following much of the original Erie and Champlain Canal's towpaths, the Empire State Trail is a tremendous recreational asset that offers New Yorkers and visitors alike the ability to experience the very best our state has to offer â€“ charming communities and bucolic landscapes that are packed with endless opportunities for adventure. I applaud Governor Hochul for enhancing the Empire State Trail website with features that highlight local amenities and tools that allow users to plan ahead while they prepare to explore on and off the trail."

Empire State Development Vice President and Executive Director of Tourism Ross D. Levi said, "Under Governor Hochul's leadership, New York continues to develop new ways to engage travelers and support the state's tourism economy. The Empire State Trail offers residents and visitors alike the opportunity to hike and bike across New York State, while exploring the state's diverse and unique communities. The Trail website's new trip planning feature makes it easier to turn a day trip into a getaway, allowing travelers to come be a part of all the wonder of an I LOVE NY vacation."

Robert Provost, President & CEO of the NYS Tourism Industry Association, said "The Empire State Trail has the potential to transform New York State into America's #1 destination for bikers, hikers, pedalers and paddlers. It offers more quality of life, economic development and marketing possibilities to more communities than any other single tourism asset in New York State. Creating itineraries and assisting residents and visitors in navigating the Empire State Trail will help us begin to realize those potentials and possibilities. Thank you, Governor Hochul, Commissioner Kulleseid and the entire team at the NYS Office of Parks, Recreation and Historic Preservation!"

In addition, State Parks announced several projects to rehabilitate key trail segments in the Mohawk Valley and Capital Region will be complete later in June.