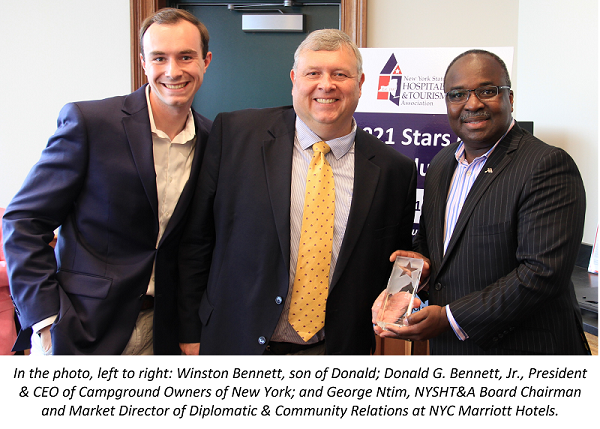 - Donald G. Bennett Jr., President & CEO of Campground Owners of New York is the recipient of the New York State Hospitality & Tourism Association's (NYSH&TA) 2021 Outstanding Tourism Executive of the Year award. Bennett was recognized at the Association's 2021 Stars of the Industry Awards Luncheon/Day at the Races Fundraiser at The Rail at the 1863 Club at Saratoga Race Course (Saratoga Springs, NY) on Wednesday, August 18.

The program recognizes the exemplary professionalism and exceptional service of individuals in the hospitality and tourism industry.

â€œEvery year, the state's hospitality industry nominates its most outstanding employees. After reviewing all the nominations submitted, the judges agreed that Donald G. Bennett Jr. was the best of the best," said NYSH&TA President Mark Dorr. â€œAll the winners of this year's awards are STARS in every sense of the word and shining examples of what New York State hospitality and tourism is all about."

â€œDon is just too humble to talk about his history of service and achievement. He is most deserving of this honor, due to a lifetime of service to outdoor tourism and especially in light of his round-the-clock efforts to enable New York State's campgrounds to open and successfully during the pandemic." observed Suzanne Bixby, Vice President Marketing & Public Relations. Campground Owners of New York.

"Don has been a giant for the campground industry in New York State," said Josiah Brown, Board Chair of NYSTIA and President of New York's Best Experiences. "His leadership has brought not only CONY's members forward but collectively they have become a national focal point of best practices. New York State's outdoor lodging economy has greatly benefited from his desire to push the industry higher.

The Outstanding Tourism Executive of the Year award recognizes an executive who has demonstrated outstanding contributions of leadership and service to the industry and to his/her community.

The New York State Hospitality & Tourism Association is a not-for-profit trade organization representing 1,000-member businesses and in the lodging and attractions industry. Our mission is to provide a strong voice for the state's hospitality and tourism industry, and to protect and enhance the financial welfare of the industry.