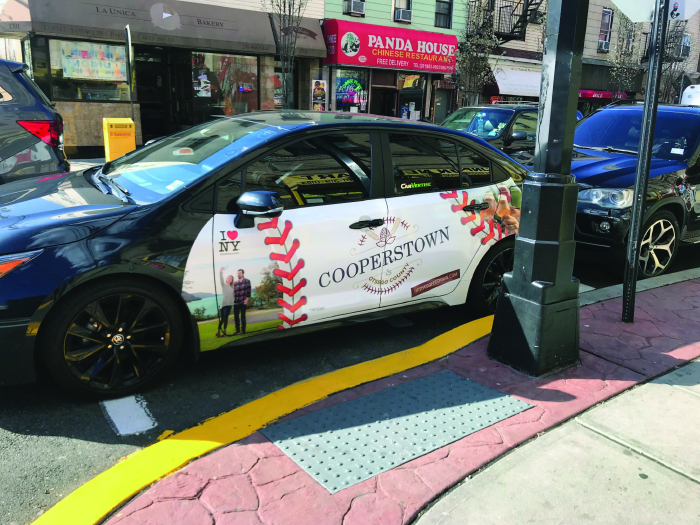 - Cooperstown native Colleen Canyon was walking along Bergan Line Avenue in Union City, New Jersey, last weekend when she spied a black sedan across the street emblazoned with a logo that caught her eye.

â€œIt stood out," she said of the white-on-black car-wrap advertisement for thisiscooperstown.com â€“ the online arm of the Otsego County's tourism office. â€œI saw the car across the street and went over and asked the driver about it. He said he gets paid by a private company to have the wrap on his car."

Never mind that Union City isn't far from Hoboken, New Jersey â€“ that other town that lays claim to being the birthplace of baseball â€“ the car-wrap is a part of Otsego County's effort to attract visitors to the region from throughout the northeast. Cassandra Harrington, Executive Director of the county's tourism office, was thrilled to hear about the sighting.

â€œWe're really looking hard at unique ways to get our name and brand out in front of as many people as we can," she said. â€œThis is a creative way to get in front of urban populations at a street level. It's not a sign on top of a big building that no one can see. It's not a billboard taking up space on a road. It's a car driving through the street saying â€œHey, come to Cooperstown!"

Ms. Harrington said the county has a good relationship with a company called â€œCarvertise," which wraps ride-share vehicles with promotions such as 'This Is Cooperstown.' She said a total of 15 cars in Philadelphia, New York City, and Boston carry the county's banner.

â€œWe just hope that people are surprised to see us in a different and unexpected place," she said. â€œWe're normally priced way out of the advertising space in those markets. We're on a limited budget but we still want to get the word out."

She was quick to point out that the funding comes not from local tax dollars but from a marketing allowance and alliance with the state's tourism division.

Carvertise tracks its vehicles, giving the county an idea of the number of impressions the drivers make as they travel through their market regions.

â€œWe're able to see some performance metrics and we think it's a great value," Ms. Harrington said. As for future outside-the-box marketing campaigns, she said her office is working now on a campaign reaching out to Latin and Hispanic communities, partnering with Paperkite to develop the visitation campaign.

Noting how the car stood out in Union City, Colleen Canyon said a more targeted message to that effect might be a good plan.

â€œThis region is classically Cuban-American," she said. â€œIf the county really wants to grab the audience here there should be advertising in Spanish."